Speed and Violence, or how to get the most out of German Mech Infantry

I've been asked on a few occasions to talk about how I run my Gepanzerte Panzergrenadier(GpPzGren) lists in Flames of War, and so I figured I'd drop a few thoughts down here for people to look over.

The GpPzGren are probably my most familiar list, mechanized Infantry tactics are my comfort zone and this list allows me to best apply that on the table top. GpPzGren were Infantry units designed to work with tanks but they could fight on their own and as they continued to develop their tactics throughout the war they became more and more adept at fighting in and out of them. There are lots of great articles out there about their historical employment, here is a quick article Panzergrenadier tactics 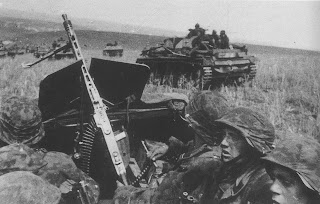 So to start what are the Pros and Cons of a GpPzGren list? 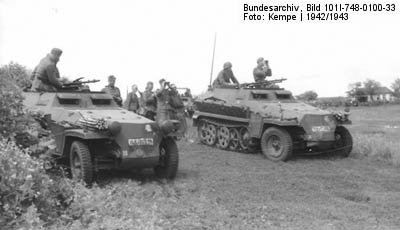 Cons:
So with the lists on the table lets break some of this down starting with the Pros.

Mobility:
The GpPzGren list is hell on wheels (and tracks) in the right hands and it's great mobility is the key to its ability to out maneuver and apply fire where needed at any given time. Halftracks give you the ability to rapidly redeploy a force or close with the enemy saving you valuable time and lessening incoming fire by rapid aggressive movement using the terrain tactically. The most important thing in using the mobility of the GpPzGren is their halftracks ability to rapidly shift the direction of violence. I find mine are most effective when I present one way, bringing concentration of force upon my enemy and then when he realizes he needs to shift forces and begins to do so I change my direction and swoop down on the forces moving in the open.

Firepower:
The lowly machine gun. When you have 15 of them all the sudden becomes a fearsome beast. The GpPzGren bring with them the power and ability to pin most anything and in proper combination they can bring with them the tools to dig out their enemies even quicker. Stalin said quantity has a quality all its own, and he was very right, remember this with the mounted firepower a GpPzGren pl can dish out, with just mgs it can have 19 dice (with riders if moving slow enough) and absolutely terrorize even dug in infantry or gun teams.

While I could talk about tanks and other weapons of war in a  list for now let us talk about the company as it stands and the greatest resource to a GpPzGren coy, the heavy pl. Two things about the heavy pl make it important, the 8cm mortar halftracks and the stummels. So why are they important?

Both have ROF 2 AT 3+ weapons or as I prefer to call them, gun team killers! These roll with your GpPzGren pls and lay waste to the Gun teams that you fear. The Stummel as a tank team has the added benefit of being able to assault, and as we all know every die counts in an assault. Again combined with their speed they rip open gun team attachments and open the door for your assaults.

Defensive fire
GpPzGrens are all MG troops, so on your worst day you're getting 2 dice each in defensive fire. This catches people off guard more often than you think. Add to that the fury of fire that you can drop on someone with some well placed halftracks and you can sit tight and know that nothing is getting in on you. In late war you can have the same feeling against tanks with the man portable AT.

Flexibility
It stems from the mobility really but a well made GpPzGren is ready to take on anything and can quickly react to any threat. I love them for this as they always give me options and allow me to be where I need to be, when I need to be, with what I need to be, and having everything mechanized allows me to bring everything all at once for excellent concentration of force.

Offensive ability
So if you've been reading any of the pros I don't think I need to go overboard on explaining that these guys have some serious offensive ability. The big thing to remember is that their ability to force project, to concentrate force and their sheer shock action stuns and breaks apart enemy forces. Unlike most combined arms forces this army can be entirely upon you all at once and then be gone. Speed and aggression.

So with the good comes the bad and this list isn't without it's problems.

Lightly armoured
So anything outside of small arms is pretty scary to a bunch of dudes in halftracks. Some of my personal nightmares are .50 cals and AAA guns with their high rate of fire and their AT they rip apart halftracks or at least bail them out. So force protection is huge with these guys. It can be done in a number of ways, speed getting you on the enemy before they can really hurt you, smoke to obscure or terrain to get you onto the position. Either way these guys can't take a lot of punishment and so need to get in and out quickly and can't go in against much in the way of firepower which makes gun teams in the defense your primary targets.

5 Hits stop an assault
Well the title says it, but remember 2 hits that damage the vehicles (even bailing) will end an assault quickly, and a bunch of GpPzGren stuck in their vehicles right in front of the enemy are definitely in harms way.

DISMOUNT! DISMOUNT! DISMOUNT!
So when trucks get hit people have a tendency to bail out as the trucks take off, so all those great things we talked about, the mobility, firepower, flexibility and the like all can go away in a heartbeat if a single halftrack gets hurt, so again plan on protection and mitigate fire, because even the best laid plans can go south when a single car bails out and you find yourself legging it in all the way through the dangerous space. 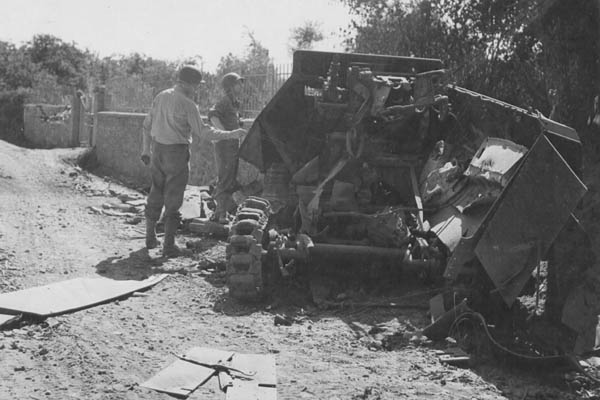 Easily stripped firepower
So as said above, the tracks can either run away or just get blown up easily and this rapidly takes away their firepower and can really strip their combat effectiveness and leave you inches short of victory. Protect the halftracks and always have a backup plan.

Need for Support
The GpPzGren list needs support, be it arty and smoke, tanks or tank hunters you need to support the GpPzGren pls so they can get in there and do the business. It's a hard thing to balance sometimes and you can really get swept away either with too much support on not enough. But remember you need to absolutely focus your efforts with this list. Using your support here and there ends in failure, hit your target hard and hammer through them, break their position and force them to regroup, as soon as they do this you have them with speed and aggression.

So thats part 1 of all of this. I'll talk more about GpPzGren in the future, maybe break out the camera on the table and show you how I like to move and exploit the terrain and the enemies position, I'll do a list building for both Mid and Late war ( I don't really do EW yet) and I'll look at the varieties of GpPzGren that are out there. Again if you have questions or things you want me to focus on or talk about leave a comment.