So I had my first game of Flames of War with my good buddy Duncan since we got back from Afghanistan and man oh man have I missed this game.

He had picked up Desperate Measures and we were both excited to create some Eastern Front lists. He's a die hard Soviet Player and I'm a die hard Eastern Front German dude, so it only made sense to throw down with the latest lists in our favorite theater.


Duncan had hand written his list out and after when we were doing our debrief and Easyarmying up the lists we found he had been 40pts short.

This was our field of battle. It was pretty light with terrain for us normally, but this was our first game in a while, we'll do better next time.

A small town held up on the outskirts of a farming ville in the rolling hills.

Duncan rolled Dust up and winning the roll to attack he chose the upper right corner as you see it and I set up in the lower left. 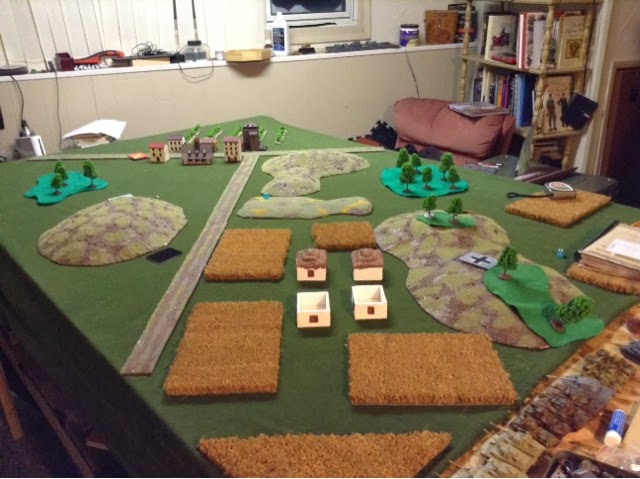 Quick shot of my force, still WIP, the Ostwinds are standing in for Wirblewinds. 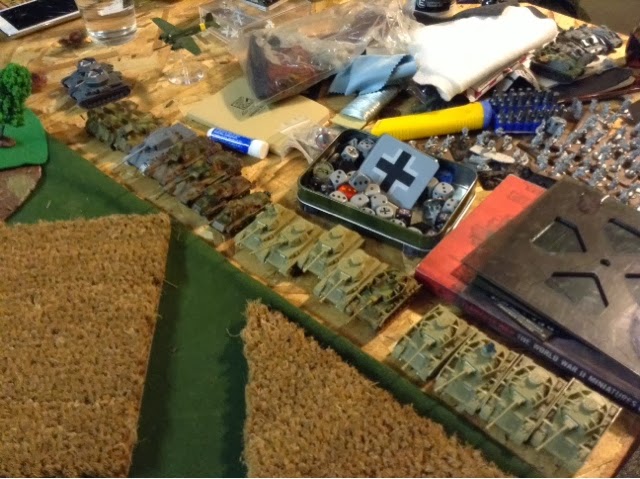 Duncan's deployment bellow. He set up his Zis-2s covering the open ground with his Infantry and SU-100s ready behind the hill to strike. 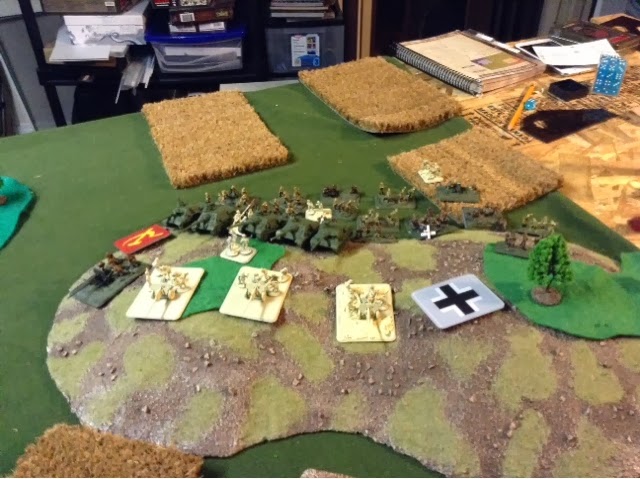 I set up in the shadow of the hill with my PzIVs, my PzWerfers sat back ready to support and my Panthers (first time I'm really using panthers so that was fun) stationed themselves covering my Obj in wait for the reserves. 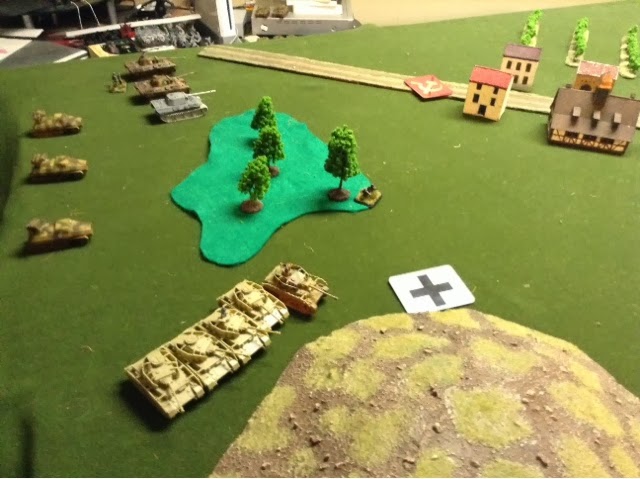 Duncan won the roll to go first and surged over the hill with his SU-100s. My favorite thing ever was his trucks being called up and in true Soviet fashion his troops carried the transports quickly forward towards the fascists. 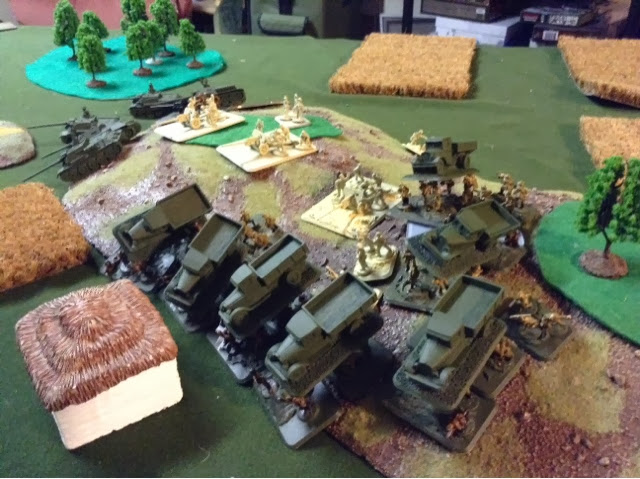 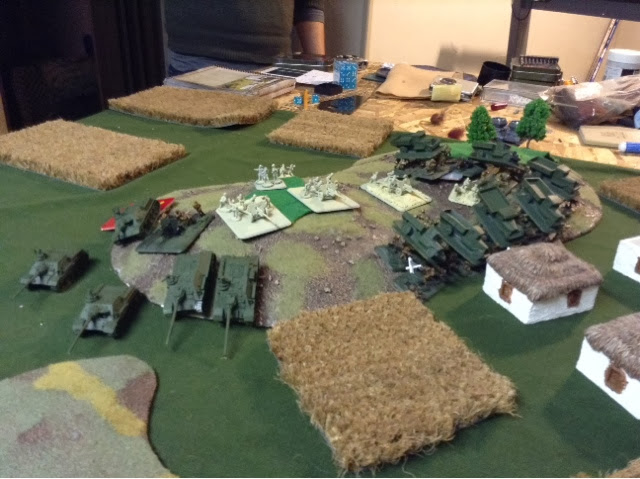 My Panzers repositioned but still stayed behind the hill and the Panthers actually backed up behind the forest to hide from the 100s and still lay in wait. The Panzerwerfers roared out and scored not only a kill, but bailed an SU-100 as well! Love the rockets. Then in swooped Rudel for the first time (today he's flying a Henschel) and he killed another cat killer and bailed a second. 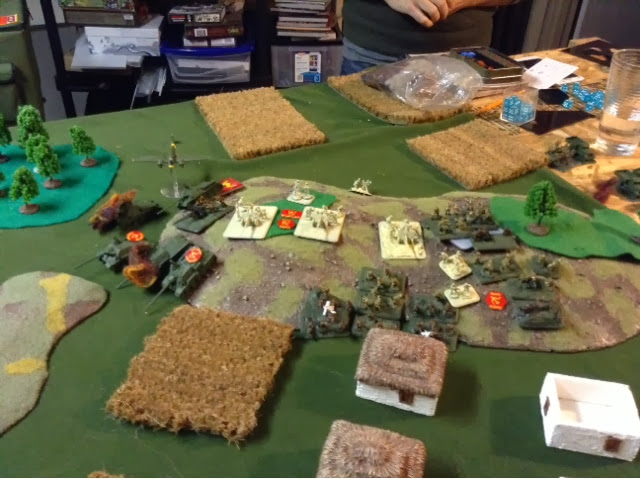 Things were looking dire for the tank hunters but they passed their morale check and fought on. One of them remounted and the two remaining big guns pushed forward along with the Infantry. Again with no targets in line of sight they ended their turn marching toward Berlin. 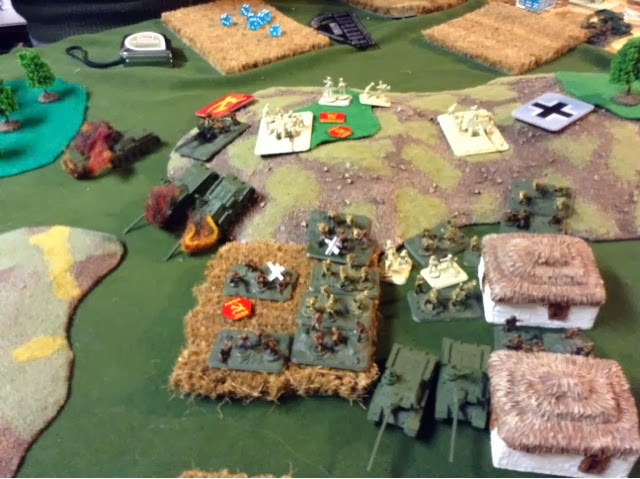 My Panzers repositioning to knife fight with the Cat Killers, or you could call it hiding, either way.
Rudel doesn't come in but amazingly the Panzerwerfers kill a Zis and bag another Cat killer (the bailed one) they pass their morale test and continue on. 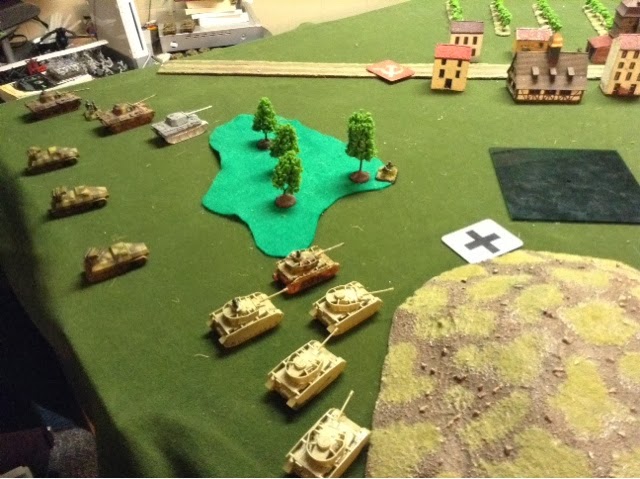 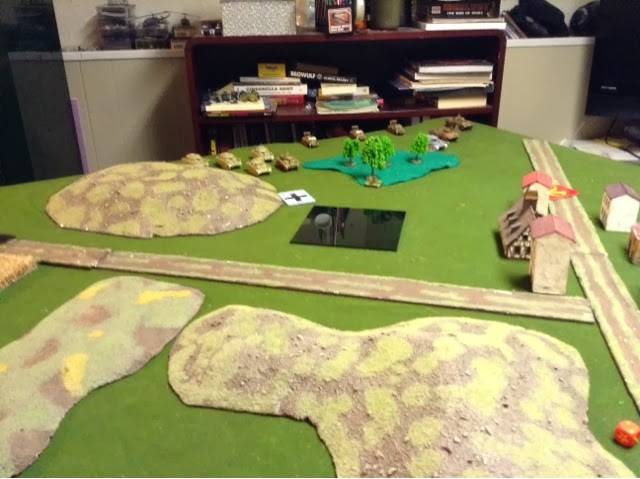 I didn't get a pic of it but Duncans turn sees him pushing forward again without any targets. He received his other Infantry Pl which starts moving through the orchard toward the objective.

I start my turn with Rudel makes another appearance, swooping in on the backside of the SUs. Lunging forward with my panzers, one of them able to take a side armour shot on a SU-100 and the rest of the PzIVs mount the hill to at least act as a distraction while they shoot at point blank on the Tank hunters. The Panthers come out from behind the forest and line up some shots for the first time in the game. The Panzerwerfers roar to life starting the shooting phase smoking the guns on the hill, they scare the crap out of me and my trained panzers and this will at least mitigate their sting. 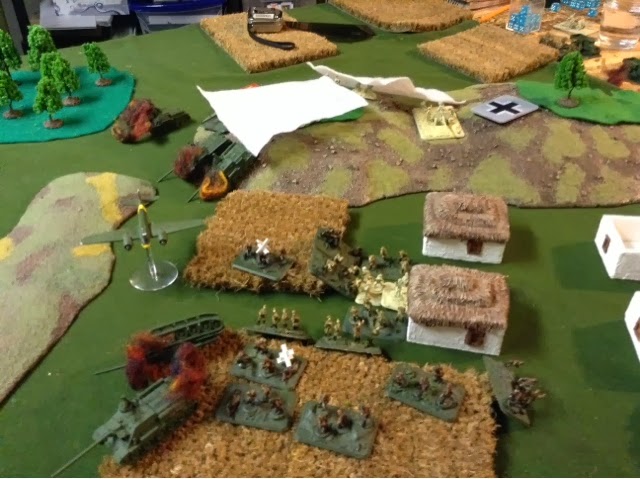 With everyone surrounding the SU-100s they go up in a blaze of glory With Rudel ending the last bailed vehicle.  My Panthers manage to reposition but nothing else does. 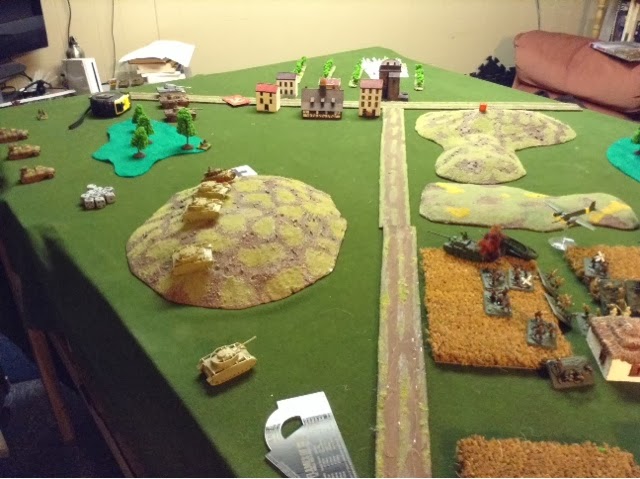 Again we forgot to photo the field in Duncan's turn. He received T-34s which swung around and with 85s blazing shot up a PzIV on the hill, destroying the COs vehicle but lucky for me the warrior lived on taking command of a local vehicle. The Infantry in the orchard pushed forward as did the Zis' in an attempt to take out a PzIVs destroying another.

In my turn I get both the Wirblewinds and my Panzers and seeing a gap in his rear armour with Duncan having pushed forward with his Zis' I drive behind his gunshields and MG them up, and destroying the pl.

The Panthers engaged and killed a T-34/85, bailing another. 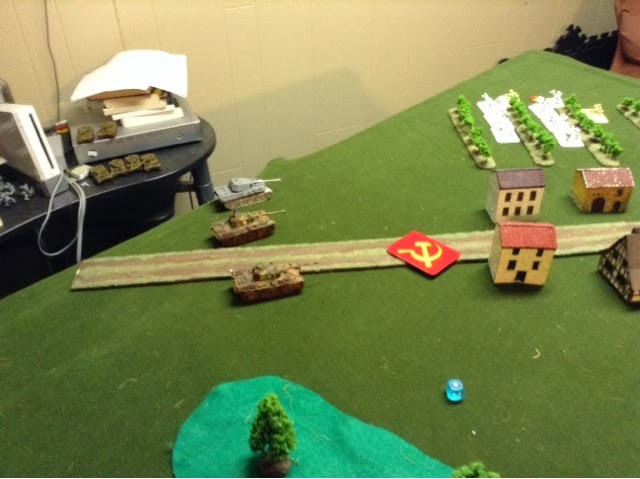 The Panzerwerfers Dropped an Infantry stand while Rudel killed and bailed another tank. He was really wracking it up. 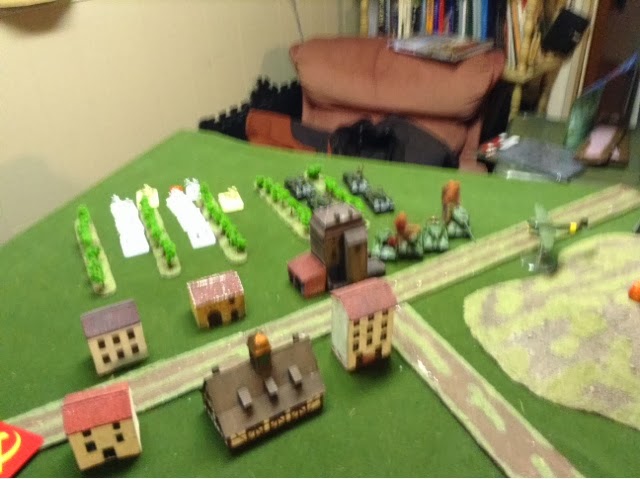 The Panzers assaulted into the position and took up a protective stance around the objective and thats kinda where we called it. 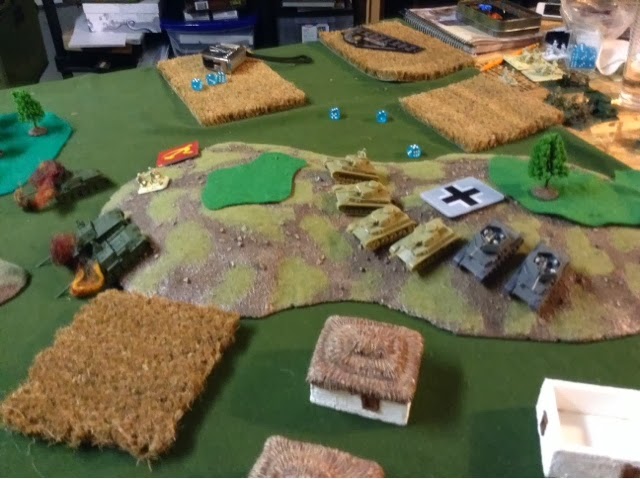 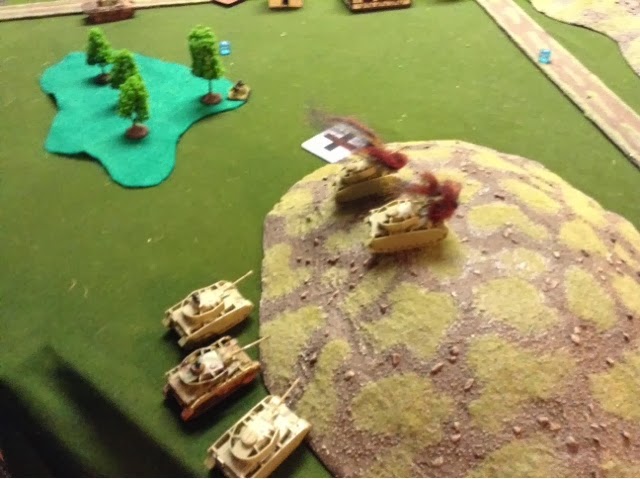 The Infantry was just out of reach of the objective and facing 4 PzIVs and 2 Wirblewinds to have to assault through. 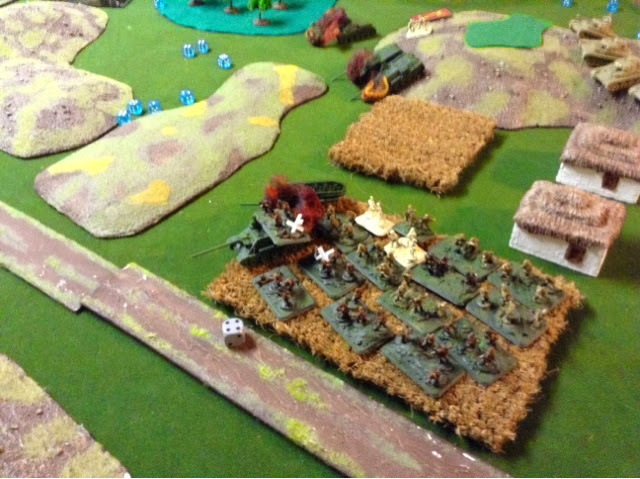 6-1 to the Germans but both lists showed a lot more promise than you see here, they both are contenders and we're gearing up for another slug fest tomorrow.

I really love this game and playing it again has reinvigorated me, I'm chomping at the bit to play again and I just can't wait. (especially for MW lol, I don't even like LW! haha)