A quick text and a phone call was all of the arm wrenching I needed to be convinced to play another Desperate Measures game with my buddy Duncan. He had just got back into town and was itching to throw down with his Soviets.

As per the norm I set up the battlefield prior his coming over and rolling for mission. Dice were thrown and it came up Counter Attack. 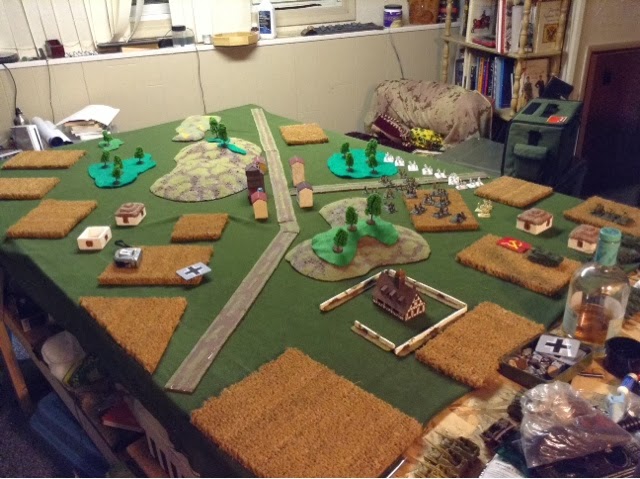 A small town along the service road in the rolling hills. Farm fields and some forests. Nothing special but terrain rich enough for us. 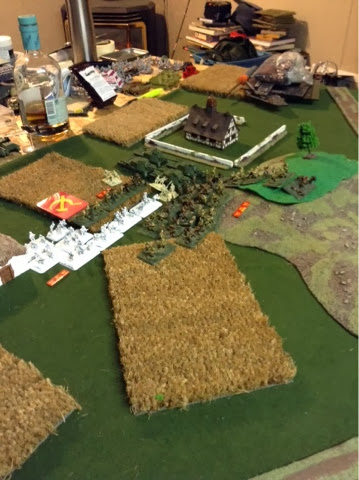 Being a mobile reserves game Duncan had to chose what to keep on table, he picked the ISU-122s and dismounted the DShKs from the trucks, leaving his SU-100s in reserve. After the game we talked about that and had things been different he would have switched the 100s for the 122s but we'll get to that. The 45mm 1942s were in ambush. 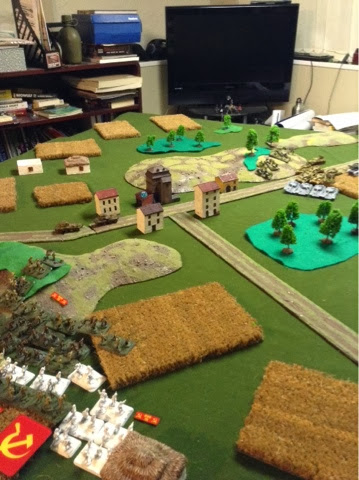 The opening Recce move saw the 8 Rads use the road to go full out up table. The troops in the forest were out of line of sight and 8". 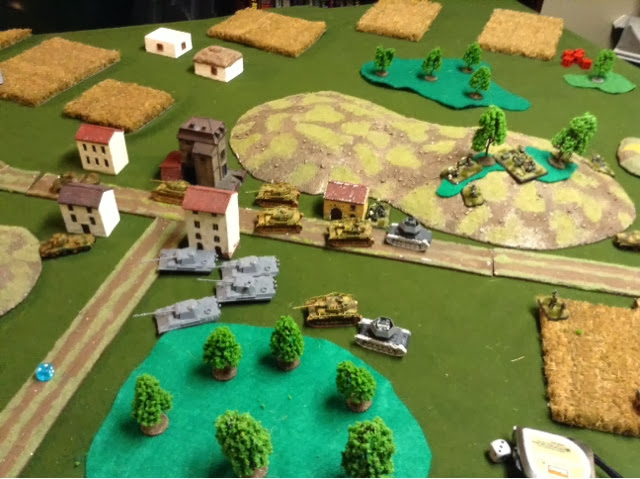 The Panzer horde(term used loosely) pushed forward. My Panthers aren't done and I apologize for their state but with the temps around here lately spraying them just isn't an option. I left the tracks off to try something new, so for this batrep I'm using German Grav tanks... Fear the Grav tank? 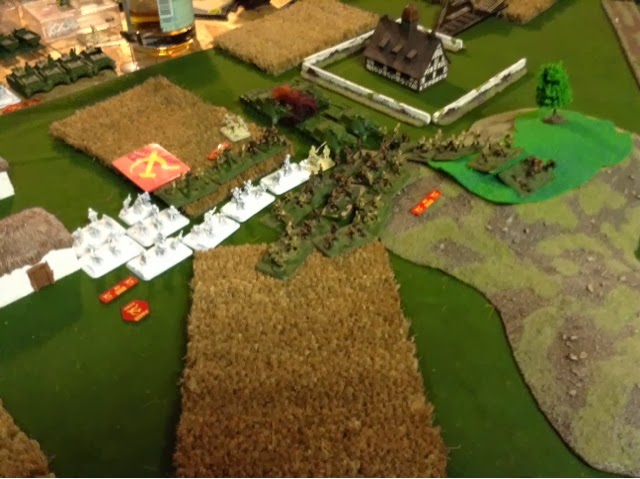 The opening salvo from the Panzerwerfers took out the Soviet Commisar, to which Duncan gleefully stated "And Soviet Morale rose sharply" and the game was on. Some Panther shots rang off hulls with one finding it's way home and destroying a 122. 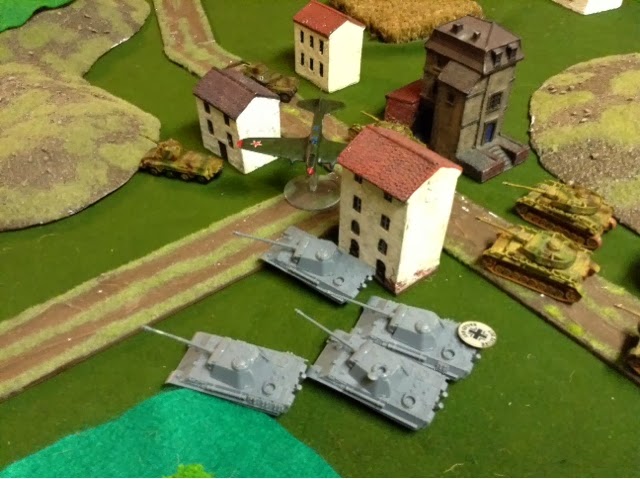 Duncan Pulled back the 122s not wanting to get in a gun duel with the Panthers while outnumbered.  The Infantry shifted behind the forrest, in an attempt to be able to threaten the second objective while also opening up space for the Aircraft to come through. A single plane came down and with some good and bad luck respectively only managed to bail a single Panther. MAN ARE THEY TOUGH TO SHOOT DOWN! Even the Ostwinds only managed to scratch the paint. 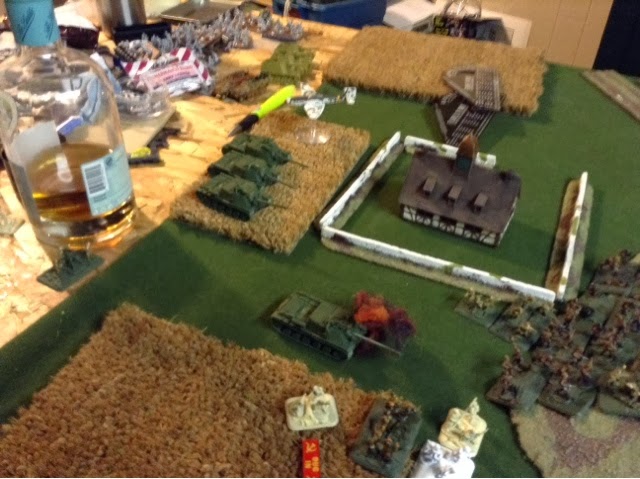 Rude who failed to show up for the opening shots makes an appearance on turn two diving down onto the ISU-122s but a hail of DShK fire causes him to waive off. So much for that idea. 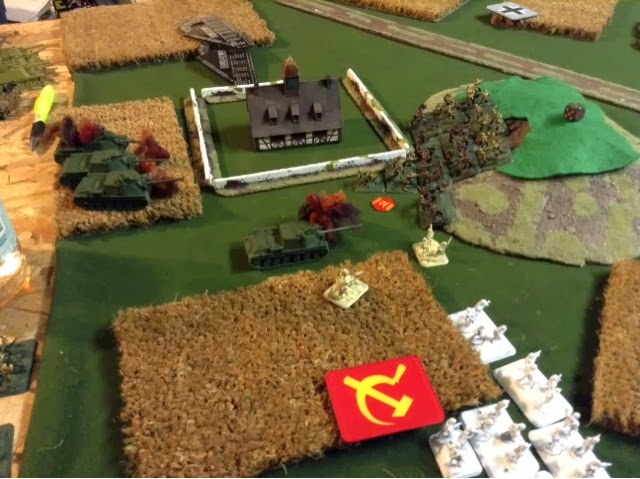 But where the plane failed, the Panthers succeeded. It took two turns and I lost a Panther in the process but in the end it worked. 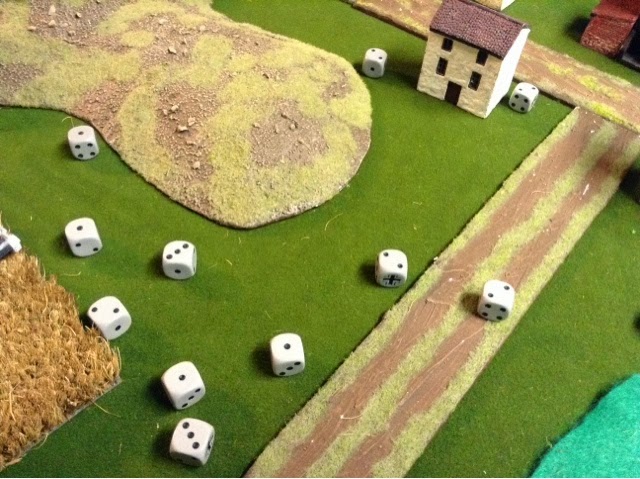 My PzIVs had moved up to threaten the small Inf Pl, and well, with MG dice like this, it could be grim. 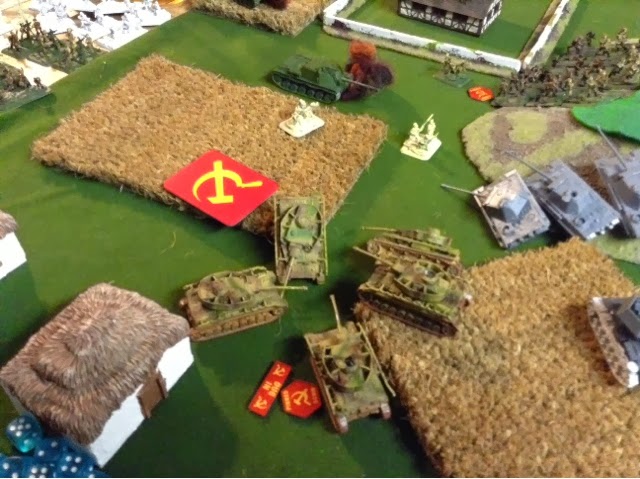 But a combination of Shurzen and tank riders makes for quick work of a small pl. The 5 tanks moped them up and then braced for what they assumed would be an ambush from the corner of the table. It was gonna hurt. 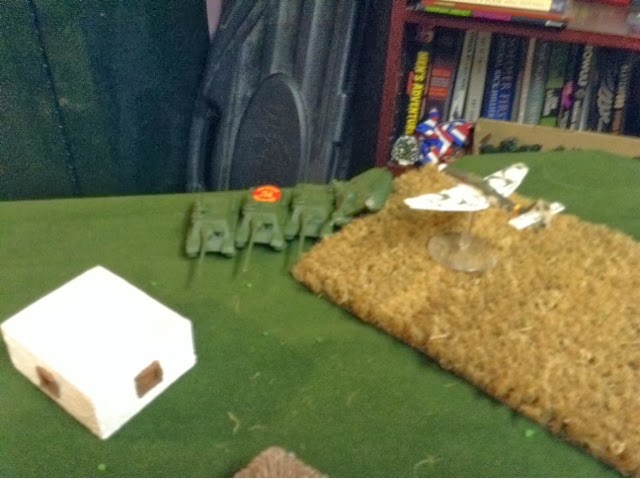 Rudel flies after the 100s but was chased off by the Soviet airforce. 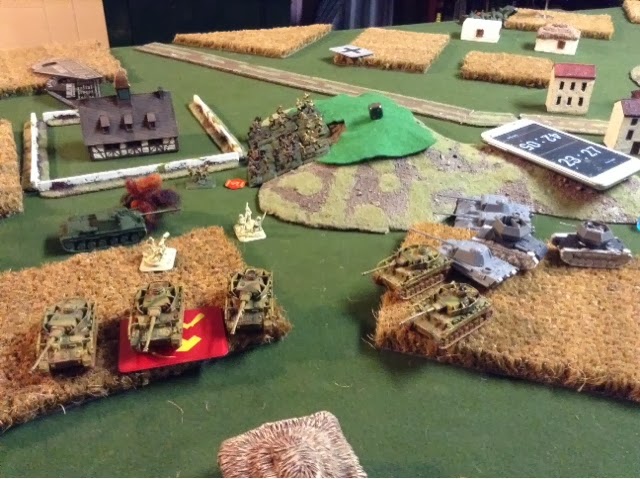 End of the turn PzIVs circling around with Panthers and Ostwinds backing them. 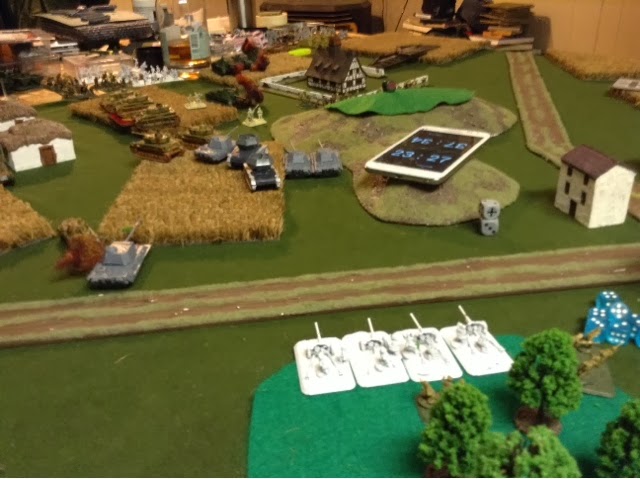 Oh, yeah, apparently that's not where the guns were. They ambushed from the copse of woods I had passed, with rear shots on, well, everyone. 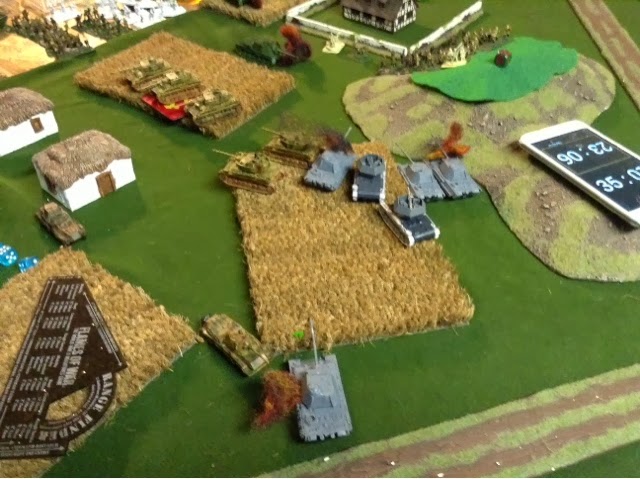 Two of the three Panthers go up in flames and the third is bailed. Enjoy the war kept him around but wow did that hurt. 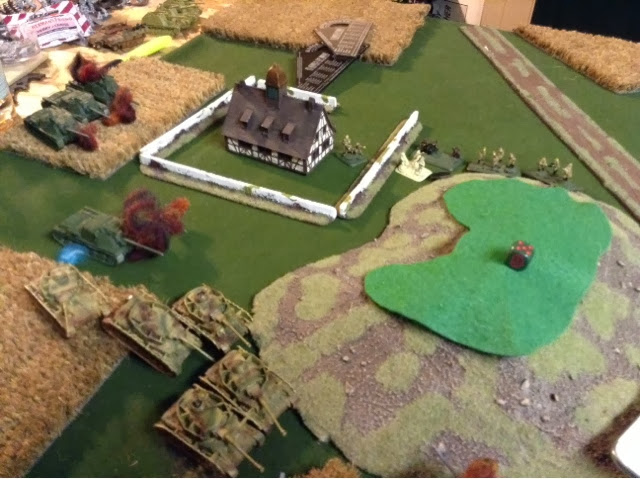 In return the Panzers assaulted the Infantry and saw them off while the rest of the force tried to do in the guns, and well kinda failed. 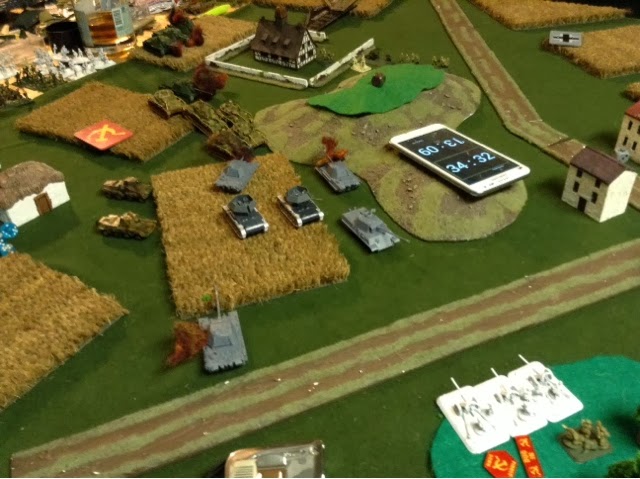 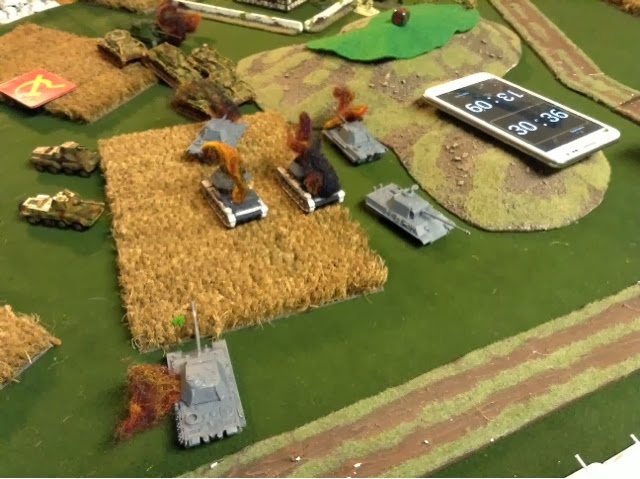 Let it never be said Duncan isn't a vengeful man. He knew he couldn't take the objective back, but he was going to make me hurt for it. Russian guns wiped out the Ostwinds, 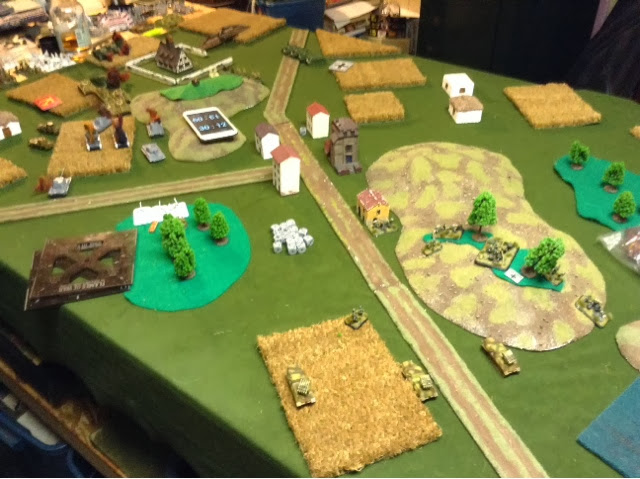 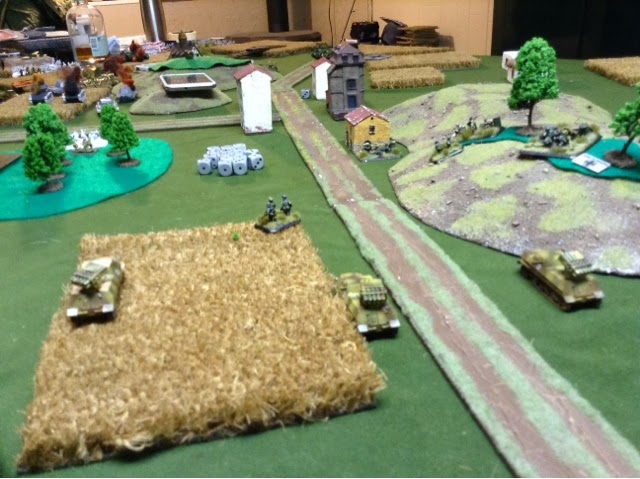 View from the starting line. 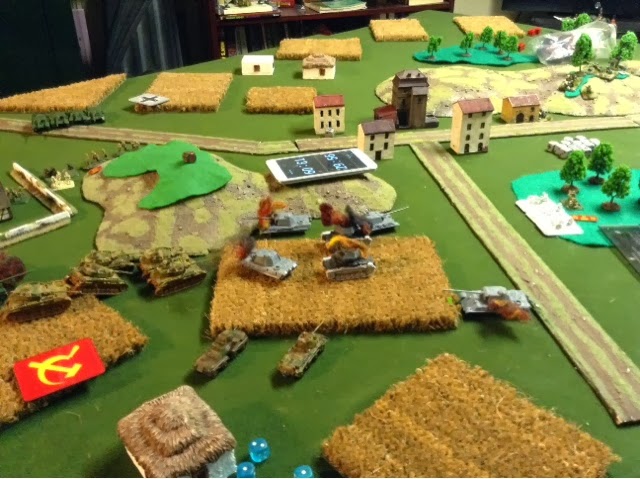 Near the Obj, the OCs hoping he can get those tank hulls working again, and soon for the next soviet push.

It was a fun game and playing confident trained Germans is a ton of fun. Panthers still being a new thing, I'm still not really sure of how best to use them but maybe a few more games will help solve that.

We talked over the ambush and the choice of reserves in our personal AAR. The hotwash came up with two main things, one the SU-100s would have been a better choice to be on table with their ability to reroll at long range and their better AT value. Second, they should have been in Ambush, it would have allowed them to ensure the greatest amount of opening shots, and allowed the guns to start on table where they would have been valuable in taking out the Recce and the AAA.


Duncan's thinking of trying out a Hero Tankovy list next. I can't wait to see what they can do.