And now for something completely different....

Okay maybe not entirely different but its switching it up for me.

I've played Germans in Flames of War for a while now for about four years and I've had a blast with them. The recent tournament in Regina had a huge lack of allied armies and while I do have a US Paratrooper list(its not all painted so I didn't take it) I've been wanting to try something different both in terms of painting and game play.

While the prospects of a new army dance in the head of gamers with the joy and excitement of children at Christmas, they are often the sworn enemies of wives and girlfriends... "You're spending how much? On what? So we're not going on vacation?

"Oh it's a 'staycation' for you to work on your little men and for me to catch up on house work?"
(yup I married a red head... An angry, angry red head...)

Yeah... It can be an amazing and exciting adventure fraught with relationship danger.

I was taking a Canadian Military history class a few years ago and somehow managed to talk my way into a situation where my wife suggested I buy a Canadian army to 'keep me on track and interested' with my class... Yeah... Best wife ever... But with the heavy work load of class and then a series of classes and work all over the country they became a long lost box in my man cave.  Fast forward to a few weeks ago when I found them, combined with the aforementioned tournament shenanigans and it was on!

So the box I had was the Canadian 3rd Division army box set representing the Canadians in the Normandy invasion for units like the Royal Winnipeg Rifles. I had every intention of using these as such, with the Winnipeg Rifles storming beaches everywhere, my love of bodged equipment sated with the Kangaroos (defrocked priests) and my enjoyment of general Canadian shenanigans seeing me through.

But part of me was pulled away from this in no small part due to the number of Canadian 3rd players and armies I've encountered and more importantly my involvement with one of Canada's famed Regiments the Princess Patricia's Canadian Light Infantry. So with that in mind I've set out to put together an army of Patricia's in Italy with the box set. Sure I can have fun now and again with the Kangaroos but more importantly I'll get to play an army that rides through mid and late war with the coolest troops Canada had to offer.

I've immediately hit an impasse, namely in how to base the miniatures, which in FoW is a big deal as the base is the majority of what people see and really sends the tone of the figures. To go with the urban street fights of Ortona, the rural areas of the Gully, or the obstacle and bunker clearing of the Gothic line(which I'm leaning towards). If you have an opinion or a cooler idea leave a comment and get me back on track.

Not wanting to get too bogged down in the basing of the Infantry, I've tried to keep some momentum by working on possibly my favorite vehicle in the world.  We have a Universal Carrier at work and every day I see it I want to steal it, drive it around, and generally have far too much fun with it. That being said it was going to make an appearance, and a big one in my army. 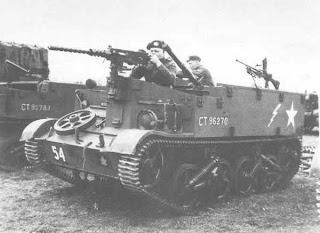 Now the vehicles wouldn't be Canadian unless the were covered in 'acquired' goods and equipment so I've set about modeling them up with some extra kit and some guns that somebody left just laying around... We would have asked the yanks if these were theirs but they looked busy and we didn't want to bother them.

This picture is great and shows the vehicle mounting a .50cal excellently. The one problem I had with it was the fact that as a game model, the position of the .50cal like this would essentially doom my models to a constant life of breaking and repairs. So instead I went with a center mount which was actually used, just less common. 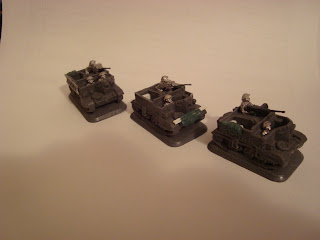 I modeled up rucks and other equipment for the carriers to well, carry. Load these puppies up so the troops can walk a little lighter.

On the center carrier I modeled up a stretcher across the hood there and I think I'll do this on a few more vehicles as I like the look and it was something that was essential and yet far too often overlooked in miniatures. 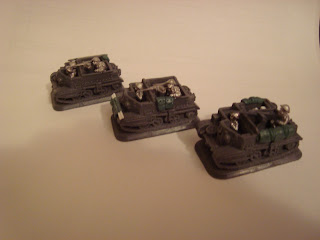 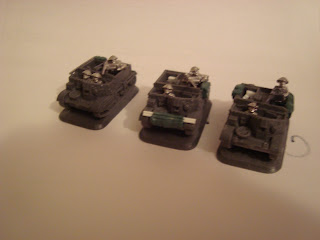 So this is the start of my Army, while I've put together a bunch more I haven't personalized those vehicles and I'll keep updating as they get their kit along the way.

If you have suggestions or ideas please send them my way, I wanna make this army look cool and I'm willing to spend a bit more time and work then I normally do to get it done so if you have something super cool in mind or a technique you think would help me out or even reading material(I love the books... though the wife might be less happy about that) hit me up with a comment hopefully it'll start me into my Infantry.