How does your orchard grow?

So I'm a big fan of terrain. I like fighting on a battlefield that looks cool and is interesting to play on, I want the table to look like someplace, not just a random assortment of stuff people dropped on the table.

So with that said I wanted an orchard! I've seen a lot of different ways to do it and some companies like Battlefront have even released their own versions of orchards or Vineyard.

And while it got the job done I wasn't the biggest fan of how clunky and well, cartoon like it looked.

So I set about doing something that was as battlefield friendly, a little more in themed with the rest of my stuff and also able to fill the role of tree lines should I want to change it up. 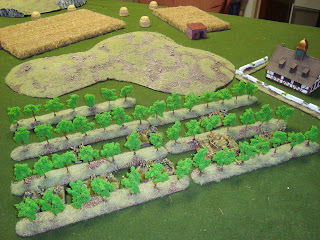 So this is what I came up with. I'm debating if I should make an area terrain marker but every time I think about it I look at them and think, it's pretty clear as to what is in and out of this....


So I'm a fan of simple, simple works... So with this as my guiding principle I looked around the man cave and found some tongue depressors I had picked up for another project. They were 8" in length which for FoW is kinda the perfect length, so I had my base.  I marked these off in a fairly regular interval so that I could drill into the sticks to add some stability for the trees. 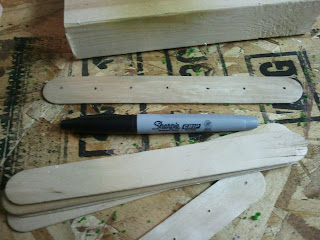 I thought about repeating this on all of them (you can see I did a second) and then I thought to myself a jig would work better, especially because I would have to drill all these holes and would need a drill block anyways. 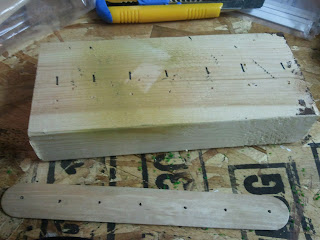 BAM! 20 seconds later and I was in business! Now I could just place a depressor on the block and drill at the hash marks, super quick and efficient. 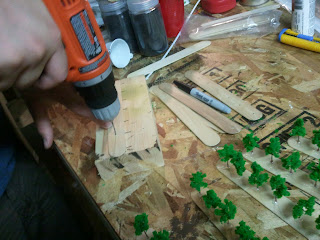 I started to drill away, inserting the trees I had done up along the way to make sure they fit. Test fitting sped things up, as many of the trees didn't initially fit and needed some additional drilling. 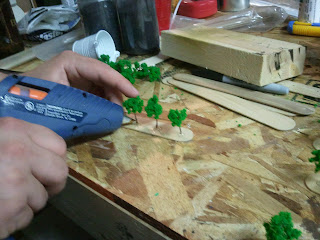 Then to the glue gun! If you haven't already purchased a cordless hot glue gun you can't possibly love terrain, ease of function or again simplicity. I glued all the trees in from both sides, this gave them a great base which again looked like a tree base and ensured the trees weren't going anywhere. 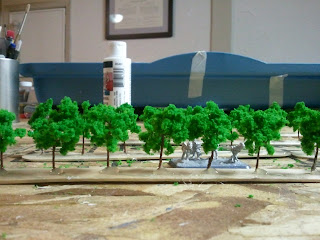 From there it was the simple process of flocking the bases, priming, drybrushing and then adding some static grass. 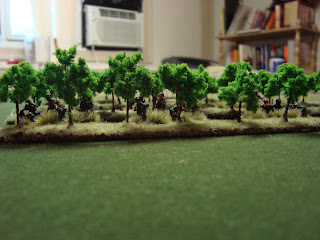 I really liked the end result. Organized, clean and very much in line with the scale. 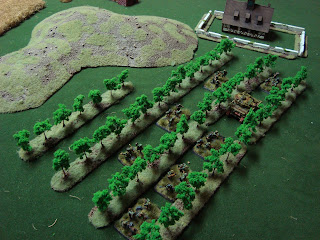 Simply arranging them on the board makes for very effective area terrain that looks the part. The dense but organized foliage adds a different look to the table and as you can see it can fit tanks if arranged properly. 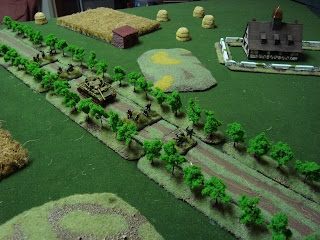 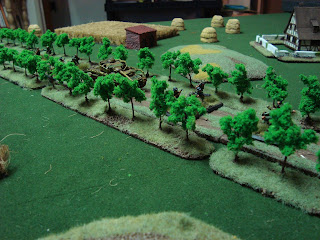 I love the look and can't wait to do up a bunch more. They'll make for great Italy and Western Europe tables.