So my buddy wanted to play, he's been wanting to play for over a month but being away and having to contend with work put a dent in our gaming schedule.  But the day had come and we were able to get in a game after work.  What made this game different was it was our first game of mid war action (I had played MW but not for like 3 years) and he wanted to play with my Germans.

For those who've been following along with this little blog, you've seen I've been working on a new army, my Canadians. And while they aren't yet done (yes there was a little proxy going on) don't hate us for it. It gave me an opportunity to A)see how the force would actually work, and B) get some inspiration to continue working on the force. I got it all right... In droves.

So we set up the table expecting to play a standard short table length game but ended up rolling and were excited to play pincer which I think is the best mission of the new batch, highly tactical and a ton of fun.

We forgot to take some initial shots of the battlefield so you'll have to piece it together from the shots. 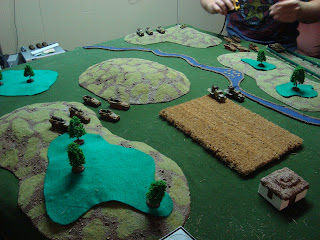 German side of things. Tyler ran the majority of his force down the riverside of the table (stream: slow going with a bog check) and had one GpPzGren pls with the AA up the middle. 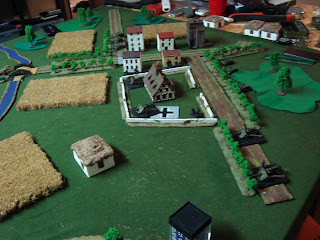 Valiant Canadian Defenders.... 17pdrs set up along the church and the treeline. I hoped they would have a big impact... I was wrong. 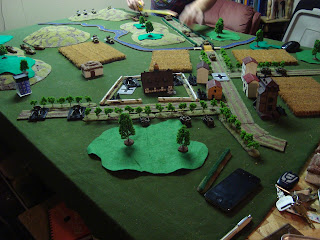 The Depth of my force was a unit of UCs with .50cals as a mobile reserve on either side. 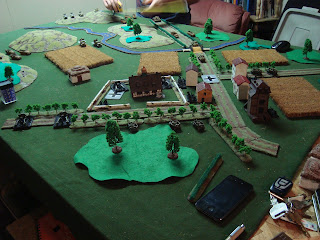 This was my defensive position with 4 6pdrs in Ambush. 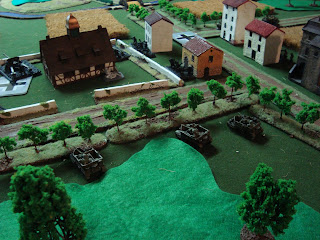 The UCs would sit back out of site waiting to push forward and help influence the battle. 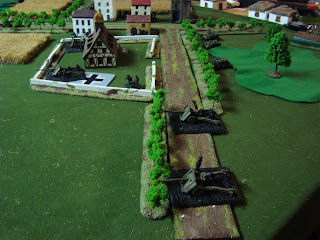 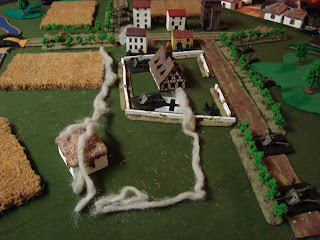 The game began with a very smart initial recce move by Tyler, which taught me a big lesson in using my recce move as I had decided not to. I learned the error of my ways. 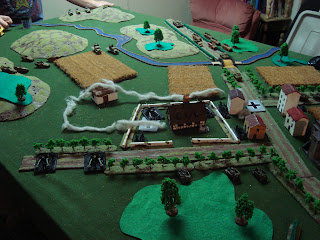 After jumping up table with his 8rads tyler smoked out my 17pdrs and nestled in to a position just short of the small bridge. A few storm trooper moves later and he was done. Special note, his tiger with Schnell of course failed his 2+ and stayed where he started.  His 8rads also failed to stormtrooper which lucky for me left a small space where I could still be concealed for my ambush. 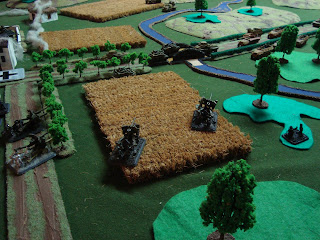 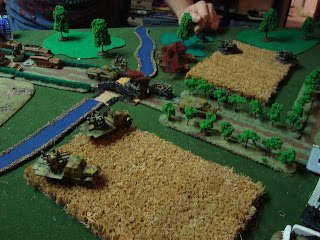 Tyler moved up the AA into a central position to dominate the ground with 2cm guns and left the 8rads still to engage the UCs. Blowing one up and bailing another. 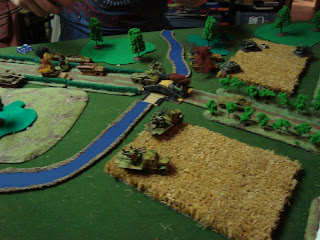 With some remounting occurring Tyler tried to push the hanomags into an assault but failing to pin the guns had dire effects and two halftracks were killed in the assualt, all in all the pl was left with just the OC, a command stand, one Mg stand and Reimer. 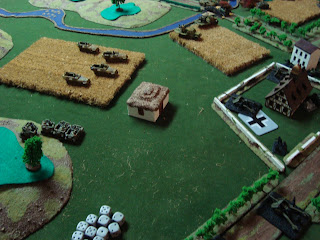 I got a reserve on the first roll and wanting a painted unit I plopped the MG carriers down, probably on the wrong table side but ah well I didn't want to walk the whole way around. A bucket load of dice later and they had no effect on the German advance... BUT THEY LOOKED SO SWEET! 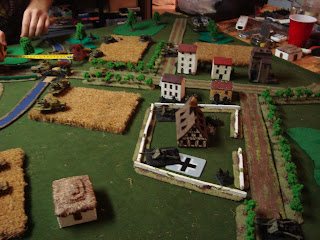 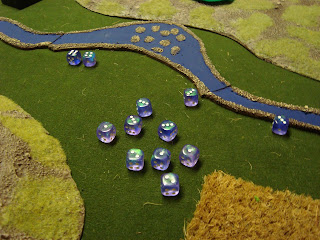 The 2cm AA guns opened up on the 17pdrs.... Which apparently they thought were up in the air... Dice rolling like this was happening on both sides. 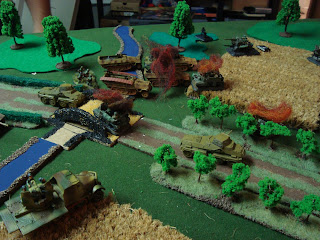 The 8rads finish off the first Carrier pl. We didn't get a picture of it but on the other flank the GpPzGren assault and take out two guns, pushing into the church for cover they now contest the obj. 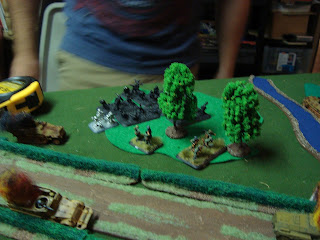 A second reserve unit shows up but fails to pin the few stands in front of it and gets pinned by the MGs and SMGs. 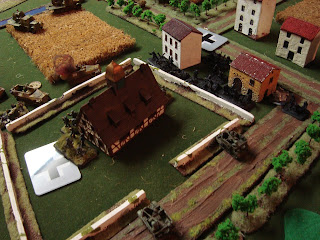 The Canadians try and take back the church but are beaten back by defensive fire. 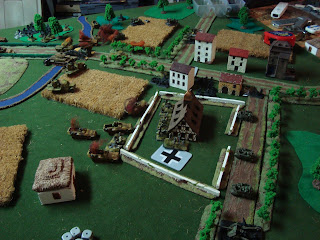 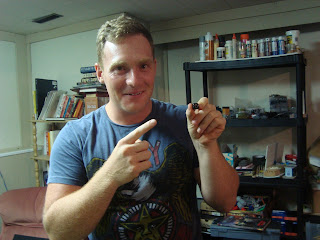 This is Tyler realizing his clever Hans roll might be of use if he assaults a building with the Tiger. 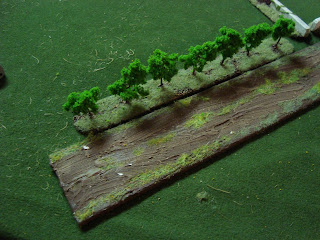 This is where there used to be 17pdrs... Before the PzWerfers fired. 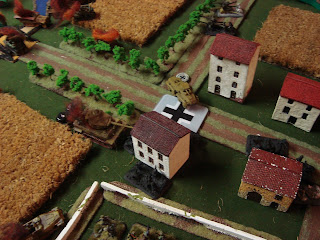 Tyler assaulted first with the 8 rad which was bailed out by the lone Piat in the building closest to the tiger. Then in came the tiger which killed a team before the Canadians pushed forward to assault it. The lone piat crew again fired a round which hit something important and the tiger went up in flames... Nobody saw that coming. 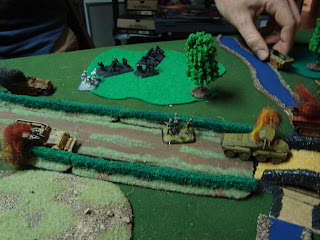 Reimer and friends assaulted the Canadians hoping their 2+ in combat would seal the deal but the counter attack killed off all but the higher commander and he was forced back despite his 3+ morale. 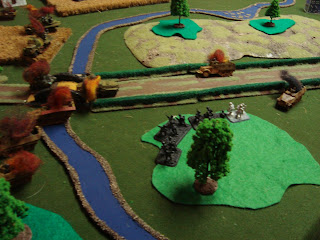 He's killed the ensuing round. 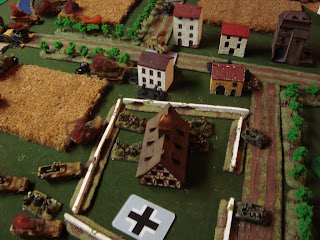 As are the AA by the second UC pl, and the 8rad by a 6pdr down the lane. 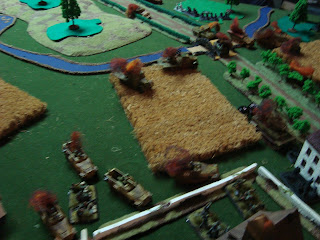 As you can see it was a bloody affair that left everything on fire. Possibly one of the best games we've played as both of us had a blast and it could have gone either way almost every turn.

So what did I learn? Things change when you're no longer veteran! But that's not a bad thing. Am I going to have to change how I do things? Yup. Even unit selection for reserves should have been very different but in the end I can't wait to play these guys again and even more importantly I'm excited to get painting again so I think it was a win that way. Plus I don't think I've gotten to use that much smoke and fire. /;-)