King of the battlefield

I'm a big fan of the King Tiger, the Tiger II, the Konigstiger, the Panzerkampfwagen Tiger Ausf. B.  When it was introduced to the battlefield with the Bagration books there was a great amount of talk that was generated and most of it boiled down to they weren't competitive.  Yup.  That pretty much sold me on the tank.

But first a little history.

The design followed the same concept as the Tiger I, but was intended to be even more formidable. The Tiger II combined the thick armor of the Tiger I with the sloped armor used on the Panther medium tank. The tank weighed almost seventy metric tons, was protected by 100 to 180 mm (3.9 to 7.1 in) of armor to the front, and was armed with the long barrelled 8.8 cm Kampfwagenkanone 43 L/71 gun.


So in game terms the tank is also awesome. It's main gun, has range 40", AT 16 and ROF 2.  Yup. Awesome. And depending on the dice gods the tiger ace skill can bring it up to ROF 3 or give it re-rolls to hit.


Armour, Top armour 2, Side armour 8 and front armour 15. So, nobody is taking you out from the front so watch your sides and your hatches.


The vehicle also has two MGs and is overloaded with slow traverse. so you have to watch it in terrain and around enemy infantry.

So why am I rambling on about this tank? Well on the one hand as I've already said I love this tank, it's lines, its look, its history, its 'non competitiveness', I even wrote a tactica about them on the FoW website. Tactica Konigstiger


The second reason I'm talking about this tiger is I recently took one in support to my GpPzGrens in a tournament and I think it made all the difference.


So prior to the tournament as everyone who's been in a tournament knows I was wrapping my head around a list to play. What was I going to take? What did I think I'd face? And how could I deal with it all?

My main concern was with the new tank hunter list.  They could jump out and destroy almost anything I could put down, and knowing at least one of the new Sherman companies would be there with some of these in tow I was worried about some options, even the mighty Panther falls easy victim to these beasts.

I had practiced my list running it with two Tigers, one of which being Otto Carius.  After reading tigers in the mud I found it hard not to put him on the table for fun.  But the more I looked at the list the more I was concerned that they would be a liability.  In the end it took a 10yr old who was going to the tournament who told me just to do what I know and play with King Tigers. 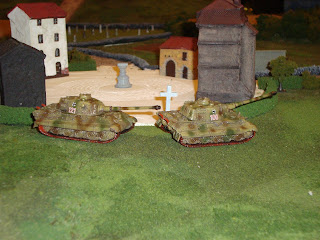 So I took the KT and it made all the difference.  While in a combined arms force there are ways to 'mitigate' a KT, it takes up a good amount of a force to do well and can only slow the beast so much.  In the end the tournament had me facing blue on blue fights and I was the only German player at the tournament without a Panther(or Pantherturm), heck I don't even own any Panthers.  Time and time again though the Panther players became what they had always created, players who realized they couldn't do anything from the front, and facing tanks that could easily destroy them. Yup it was awesome. 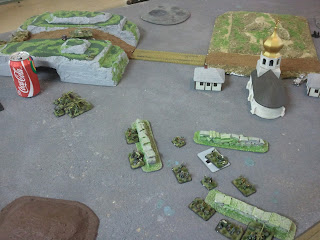 My KT overlooking a battlefield against PZ Reg BAKE, this one model dominated the battlefield and restricted my opponents movement critically.


Even after the tournament when we were going through the store to buy things for our next great incarnation of our armies, people kept asking me why I didn't have or more importantly use Panthers, I just responded by asking them how it did for them.


I think in the new Meta there is a great place for the KT, properly supported it forms a great stopgap and a pivot unit around which you can focus the advance of your troops.  I've never run one alone before outside of playing a KT list, but now I'm opening up to using this in more lists and having a blast with it. The hulking hunter sitting back and skulking the lines causes a lot of fear in opponents and that is worth the 345 pts alone!


Either way I should get back to my Canadians and the metric buttload of terrain I'm working on...