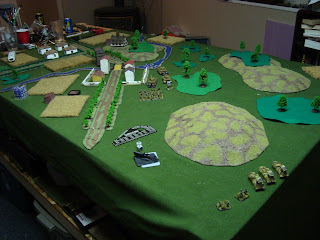 So this is the table we threw down on last night.  Don't mind the figures we were just setting up at this point.

Tyler was rockin' A MW Tiger company list I had thrown together that he liked the looks of.

I had my Canadian list with a twist, not wanting to be a jerk and face down three Tigers with 4 17pdrs I dropped them and my mortars to roll with 3 Shermans... Yeah... MW... That didn't feel like a fair trade but it did make for an awesome game.
PPCLI in Italy
HQ
2 x Rifle pl with piat
1 x Rifle pl
2 x UC pl with .50cals
Mg pl with carriers
AT pl 4 x 6pdr
Heavy mortar pl 4 x 4.2" tubes
3 Shermans 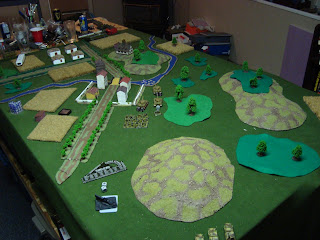 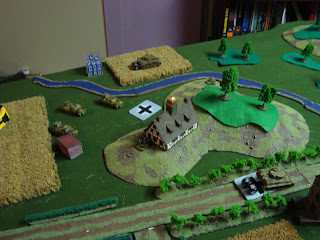 The mission was Dust up and the objectives in the German deployment zone were the road and the dead ground behind the Church. 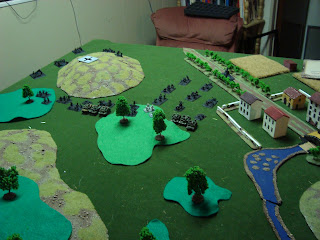 On my side the Objectives were the road and the large hill that dominated the ground. 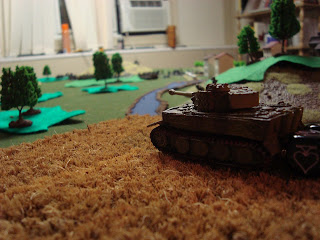 Two out of the three tigers were aces. Yeah thats how Tyler rolls. Here is the view from the OC who was watching along the stream from a wheat field. 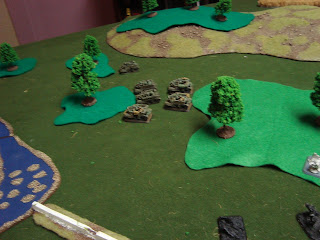 My Recce move brought me up along his flank, though the thought of rolling 6 universal carriers against 2 Tigers had me worried, for good reason. 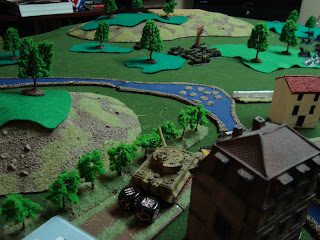 Tyler got the first turn and was able to engage and destroy a UC, bailing another as the OCs tiger repositioned and fired on the rifle pl. The PzWerfers opened up pinning the Rifle pl but caused no losses. 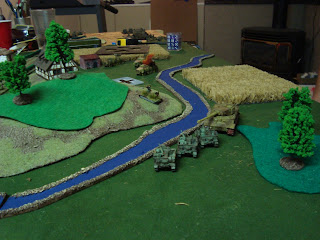 In my turn I sped the UCs out and opened up on the two PzWerfers in range, tagging one and putting a dent in the double wide template of the unit. 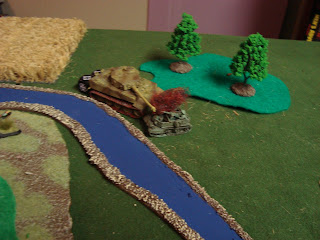 It wasn't without its danger as Tyler destroyed one of the Carriers while the others disengaged. 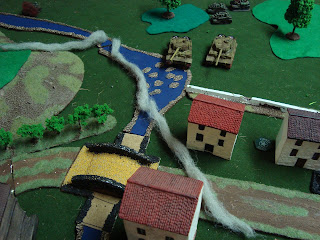 We forgot to take a pic of the Infantry assaulting into the Tigers (you can see the smoke) But you can  see the after effect, ie no Rifle pl and no OC, yeah... It was that kind of turn. 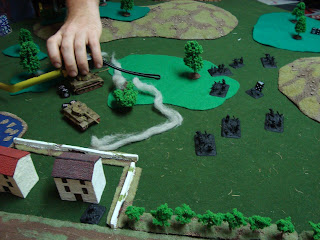 Rifle Pl 2 repositioned to try and protect the Objective along the road. While I smoked the tigers. 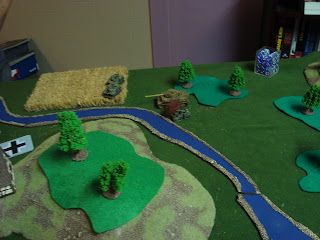 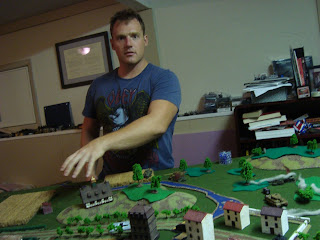 Here's Tyler showing me what he's going to kill, 'Everything around here'. Believe this man when he says things like that. 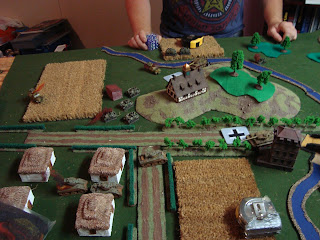 The next couple of turns were  marked by my reserves showing up,beginning with my Shermans which killed the PzWerfers.  I the proceeded to throw my Pls of UCs and Shermans and everything else I had at the objectives. 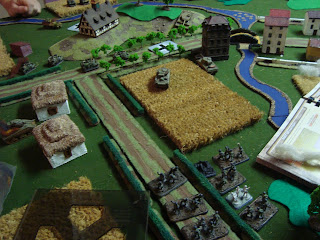 This was where the war was to be fought, until Tylers Reserves showed up, a Tiger and the Grens. 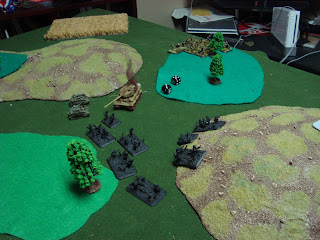 He had ran his tiger at the double so I charged it without fear of the defensive fire that has put these Canadians down a few times and managed to pop the tiger with a well placed Piat shot before encircling the woods with the Rifle Pl and the UCs. 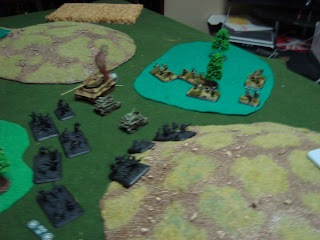 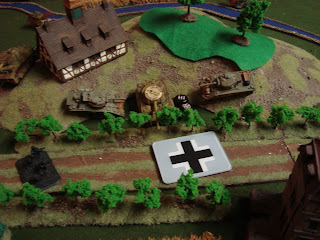 Racing forward to try and take out the tiger with my shermans I blew the firepower roll and the mighty beast of war with it's rate of fire three gun was only bailed... I did not feel okay about the situation I had just put them in. 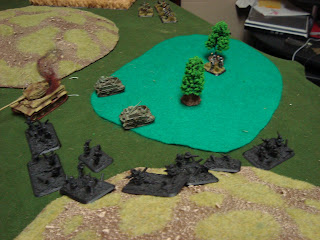 The UC's charged in and finished off the Grens after a huge shooting turn had greatly reduced them, with only the Command team surviving, and he would fail his all on your own test. 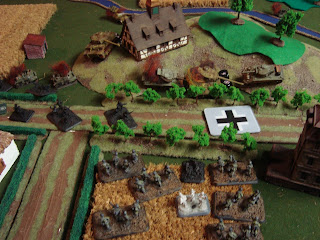 In the German turn the three dice fell, with all three shots missing, a small miracle and the OC shot the back end out of one of the Shermans.  The Other sherman passed his morale check and put two shots into the side of the tiger again and this time put it out of action for good. 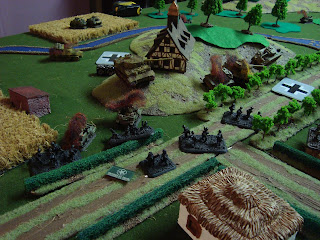 With all his pls dead the OC decided the better part of valour would be to return to the HQ and get some more men, failing his company command check and quitting the field.

I had lost a pl but with 9 it was still a 6 one as everyone else was badly beaten but not quite dead yet.
A great game of amazing disparity but a ton of fun. These Tigers are mean, and only a few lucky rolls separated victory from defeat. The way a game should be.