So yesterday my good friend Duncan and I threw down on some of the new terrain I've been working on.  We played the standard around here, 1750pts LW.

To start off a few pics of the battlefield. We used the new stream I did up, ran it as a shallow stream, so difficult terrain requiring a bog check with the ford being treated as clear(the bridges weren't done yet).

One side of the river had tree's lining it(used the new orchard lines) and this made for a cool and realistic part of the board. 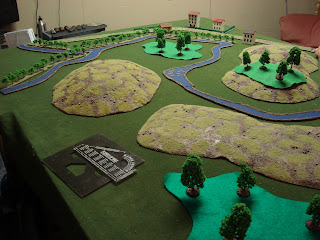 The center of the table had three large hills and a rise that were shaped around the streams winding path. 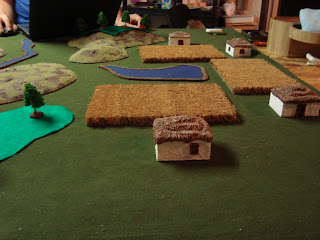 The far side of the board had some farmland with a small pond. 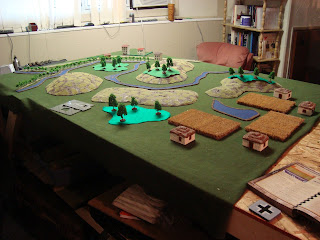 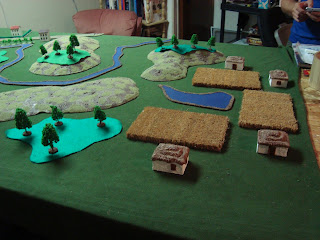 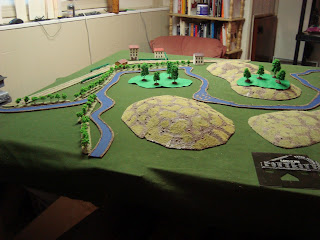 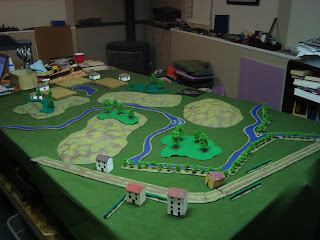 The view from the other side of the world 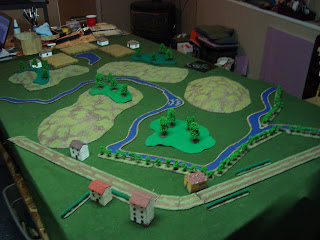 Small town on the edge of the world.

The mission we rolled up was Hasty Attack. Duncan was defending with the might of the Soviet army as the Germans counter attacked, attempting to slow down the progress of Bagration.

The soviet obj was central on the board with the two german obj being placed far to either side. 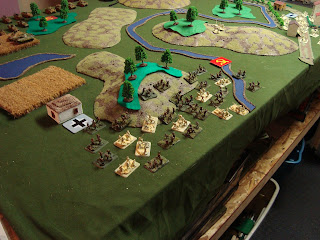 Duncan deployed two of his four pls right off the bat (the first of two mistakes in the opening turn) forgetting he had an immediate ambush. He deployed the large coy towards the farmland, holding both the central and the farm objective, with most of the HQs assets it it. 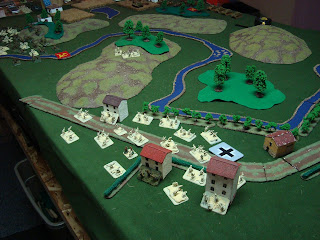 To the small town he deployed the medium sized Coy. Of specific note two antitank rifles, along with two pioneer stands were deployed with this Coy. 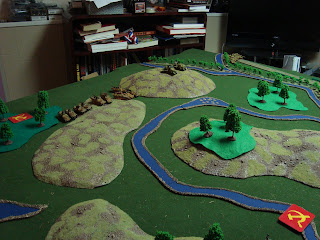 I removed the farmland objective and made a presence on table heavy to the small town. I had both GpPzGren pls central with my AA sitting on the hill and my Pz IVs on the road. My intent was to give the soviets the strait up bums rush and attempt to claim an objective prior to the might of his Tankovy from ruining my light armoured day. 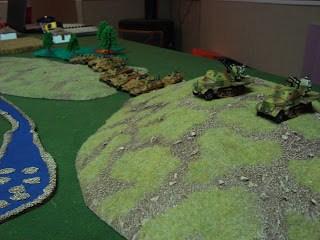 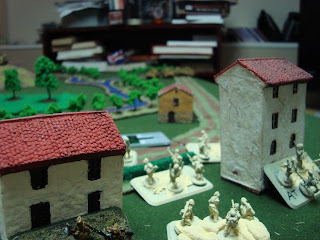 This was the view from the objective I was targeting. 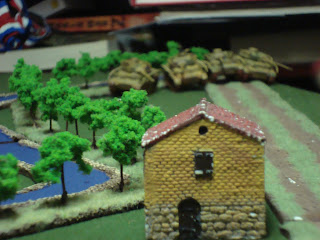 The Panzers waiting down the road. 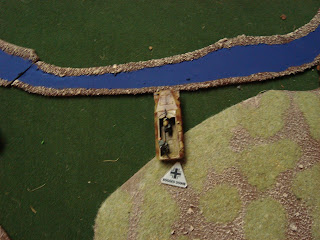 After forgetting to roll for reserves (the second big mistake of the first turn) the first move of the game my OC moves forward to cross the paltry stream, and rolls a 1. Awesome start. 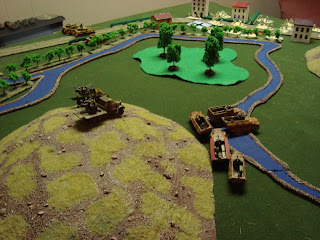 My AA leaned forward on the hill to protect the bulk of the GpPzGrens while covering the Panzers. 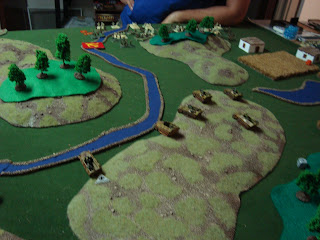 I broke one pl of GpPzGren off towards the farmland. It's goal was to hold the large Strelkovy in place with its weight in MG fire to prevent them from effecting the other objective. 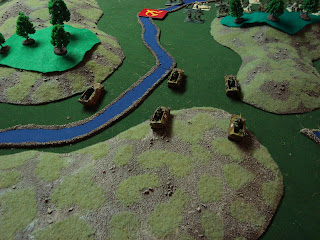 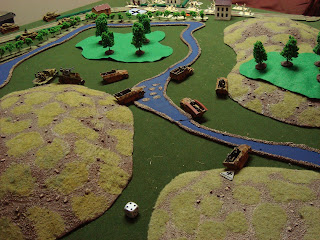 The other pl made a break  across the river and spread out to avoid the possibility of the Shturmoviks showing up. 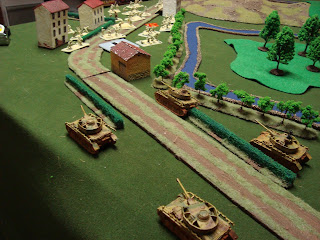 Panzer IVs rolled up and got lucky. Two hits with the main guns targeting gun teams, to failed 3+ saves(they were GTG of course) and two firepower checks saw off the antitank rifles that are the bane of my halftracks. A fortunate start for the Germans. 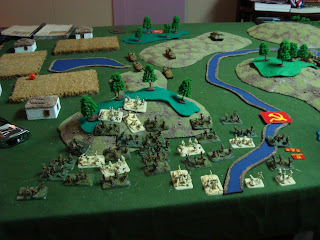 Soviet turn was short with the Infantry bunkering down to await armoured assistance and the planes which failed to show up. 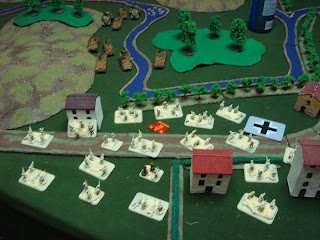 2nd turn saw the arrival of the KT which double timed it up into a firing position.  I advanced further around the Soviets and formed  up a firing line on either side of the medium pl, though out of assault range.  Fire continued to rake the defenders with a few stands falling but more importantly the coy being pinned. 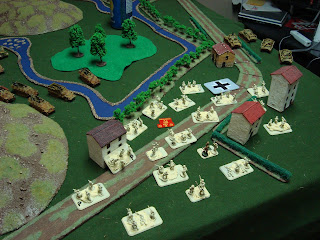 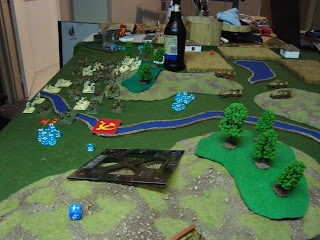 On the far side the German halftracks continued to move around and harass the larger infantry mass. 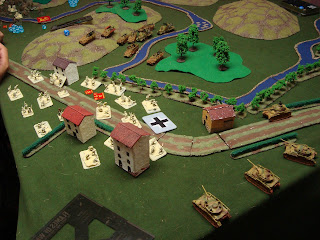 My storm trooper moves spread me out to maximize MG fire.  The soviets decided to hold one more turn, concerned there was too much MG fire to mount a successful assault. On the far side the large strelk started moving perhaps their mass shifting would divert some of the German forces. A lone Shturmovik cam thundering down towards the massed halftracks and AA guns.  The quad AA guns fired into the skies madly, and with 9 hits a single 6 was rolled for a firepower check and a sigh of relief was felt by the Germans. 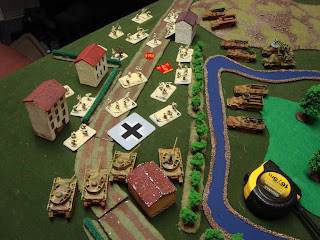 Seeing the Soviets begin to move I knew I couldn't wait any longer and pushed both pls in close. Massed MG and main gun fire raked the lines pinning the Soviets. The halftracks crashed the Soviet line and killed off the 5 teams in range before the soviets counter attacked, bailing out a halftrack, but drawing the panzers into the assault. 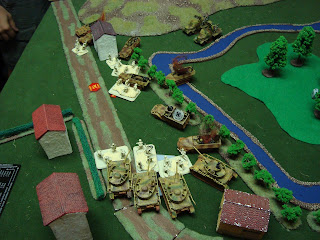 As the Panzers were not assaulting units they could not fight this round of the assault but would fight after that. From here the assault turned nasty with both sides losing terribly. But in the end the Soviet commander (he was all that was remaining) broke. 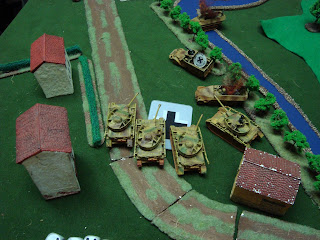 The GpPzGren broke due to heavy losses but the Pz IVs remained on the objective. 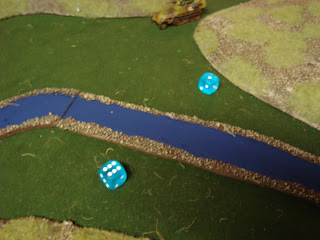 At this point the Strelk were too far away to take back the objective and the air force was busy elsewhere.  So it came down to a reserve roll, A SIX! THE TANKS WERE COMING! But where? A one found them reinforcing the farmland.

I was sweating that one. After the tanks showed up he had a 66% chance to be all over my tanks in the open and my 4 PzIVs were not going to last long against them. This one came down to luck, but I'll take it.

We both loved having some water features and more of a 3D environment with several large hills that broke the field up into lanes and alleys with dominating high features (which I managed to avoid!).

A ton of fun and can't wait to do it again, but it looks like the next one looks to be Mid War.